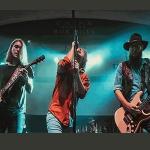 Reckless Kelly with the Braun brothers is a group with family legacies in music performance. Music Row magazine proclaimed, “In my perfect world, this is what country radio would sound like.” The band claims that the Heartland gave them authenticity. Their Grammy winning song Long Night Moon in 2013 is part of a long string of critically acclaimed work. Reckless Kelly opens for Whiskey Myers in what is sure to be a tremendous night of Red Dirt.

Ticket Info: https://www.statefair.org/concerts/whiskey-myers-special-guest-reckless-kelly
Event Website: https://www.statefair.org/concerts/whiskey-myers-special-guest-reckless-kelly
Add to my calendar
Venue: Nebraska State Fair
The Nebraska State Fair is an annual 11-day event that is held at the end of August through early September, ending on Labor Day. The fair is hosted at Fonner Park in Grand Island, NE. The Nebraska State Fair offers insights into the unique culture of Nebraska. It is built on 150 years of tradition and showcases the talent, products and people of Nebraska. Here, Nebraskans come together to experience the latest technological advancements in agriculture, first-class entertainment and the most delectable and extraordinary food the state has to offer. Like many state fairs, the Nebraska State Fair includes a competitive livestock exhibition, farming equipment trade show, and competitions in other fields, such as handmade crafts and baked goods.
700 East Stolley Park Road
Grand Island, NE 68801
Phone: 308.382.1620
Website: http://www.statefair.org/
Copyright © 2020 by NRG Media. Internet Development by Frankly Media.