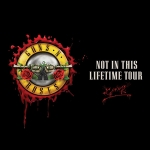 Guns N’ Roses is bringing their outrageously successful Not In This Lifetime Tour back to the U.S this fall – and for the first time in 2019. With fans hungry for more GNR, the band revealed eight new dates across the United States and they are coming to Lincoln!

Guns N’ Roses fans rejoiced when Axl, Slash, and Duff reunited for the Not In This Lifetime Tour back in 2016. Since their unbelievable return, the rock icons have performed 150+ shows for over 5 million fans in stadiums, arenas, and as part of festivals worldwide. Last year the band made history by performing in Hawaii for the first time ever at Honolulu’s Aloha Stadium. They have dominated 14 stadiums and held five summer festival headlining slots around the world as part of the monumental run. The European dates in 2018 alone brought the mind-blowing stage show to over 750,000 fans.