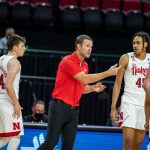 The Nebraska football team will hold their fifth practice of the spring this morning. Linebackers coach Barrett Ruud, defensive line coach Tony Tuioti and 3-to-4 members of the defense will meet with the media after the workout. players. You can find links to today’s interviews at HUSKERMAX.com. The Husker’s Red-White Spring game is set for Saturday, May 1st. More than half of the available spring game tickets have already been sold.

Husker men’s basketball coach Fred Hoiberg yesterday announced the hiring of former Chicago Bulls assistant Nate Loenser to the Husker coaching staff. Loenser worked with Hoiberg at both Iowa State (2013-15) and with the Chicago Bulls (2015-18). Hoiberg said he believes Loenser’s combination of coaching experience at the NBA and collegiate levels and player development skills will greatly enhance the Husker program.

San Jose State has hired former Nebraska coach Tim Miles to take over the Spartans’ struggling men’s basketball program. Miles’, who spent seven years at Nebraska, led the Huskers to their first NCAA Tournament trip in 16 years in his second season with the Cornhuskers. Nebraska made it to the NIT in 2018 and ’19 before Miles was fired. San Jose State fired coach Jean Prioleau after he went 5-16 in his fourth season at the school.

Husker jumior Spencer Schwellenbach is one of 17 players named to the John Olerud Two-Way Player of the Year Award watch list. Schwellenbach has started at shortstop in all 18 games this year and has hit in the middle of the order, batting .353 with team highs in runs (21) and doubles (7), while adding three home runs and 14 RBIs. On the mound, he has four saves in six appearances., and hasn’t allowed a run in 7.0 innings pitched, giving up only five hits with no walks, while striking out 11. The Huskers will host the Maryland Terrapins in a three game series at Hawks Field this weekend. Game one is Friday night at 6:30.

Nebraska shortstop Billie Andrews was named the Big Ten Freshman of the Week on Tuesday, marking the second straight week she was selected as the conference’s top freshman. A native of Gretna, Andrews went 7-for-14 in the four-game series at Rutgers with two doubles, a homer, three RBIs and four runs scored. Andrews is just the second Husker to be named the Big Ten Freshman of the Week in consecutive weeks, joining All-American MJ Knighten. The Husker softball team will host Illinois in a four-game series at Bowlin Stadium this weekend.