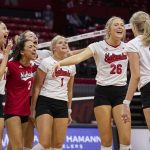 Nebraska is the 5th overall seed for the NCAA Volleyball Tournament, which begins next week at the CHI Health Center Omaha. Making their 39th straight NCAA Tournament appearance, the Huskers will open the tournament on Thursday, April 15th at 2:30 against the winner of the Texas State-Utah Valley first-round match. The top 16 seeds received a first-round bye. Nebraska’s region includes the No. 4 seed Texas, 12th seed Baylor and 13th seed Penn State. The Huskers are on the left half of the bracket that also includes the No. 1 national seed Wisconsin, 8th seed Florida and 9th seed Ohio State. The top two national seeds on the other side of the bracket are No. 2 Kentucky and No. 3 Minnesota. The NCAA Final is set for Saturday, April 24th at 8:00.

The Nebraska baseball team took 2-of-3 from Illinois this weekend in Champaign. The Huskers won Friday’s series opener 8-6, they lost Saturday 10-8, but won yesterday’s rubber match 12-7. The Huskers will host the Maryland Terrapins in a three game series at Hawks Field this weekend. Game one is Friday night at 6:30.

The Husker football team is holding their fourth practice of the spring this morning. Quarterbacks coach Mario Verduzco, running backs coach Ryan Held and some members of the offense will be meeting with the media after the workout. You can find links to those interviews at HUSKERMAX.com. The Red-White Spring game is set for Saturday, May 1st.

The Huskers have landed their first commitment for 2023, tight end Benjamin Brahmer from Pierce. The 6-foot-6, 195-pound recruit starred on a Pierce team that won a state title finishing with almost 750 yards receiving, hauling in 44 catches and 10 touchdowns.

The Tri-City Storm completed a weekend sweep of the Sioux Falls Stampede Saturday night with a 5-1 road win. Now in first place in the Western Conference, the Storm have now won a season-high six consecutive games, outscoring their opponents by a 14-3 margin this week. The Storm are at Lincoln Friday, they host the Stars Saturday.

The 11th ranked UNK volleyball team swept the 13th ranked Wasburn Ichabods at Health and Sports Center Saturday (25-18, 25-17, 25-22). The Lopers close out the spring schedule on the road. They are in Missouri this weekend for matches against Missouri Western and Northwest Missouri State. The MIAA Spring Invite is April 16th and 17th in Topeka, Kansas.

The UNK track and field team won eight events, had 14 runner up finishes, broke 10 school records and recorded some national list performances at the Central Nebraska Challenge Saturday at Kearney High School. This was UNK’s first home outdoor event in nearly two years. The Lopers will be competing at the Wichita State Open this Saturday.

The UNK softball team dropped a pair of games to Missouri Southern, and Pittsburg State this past weekend at Patriot Park. The Lopers have a doubleheader at Fort Hays State Saturday.