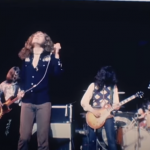 On December 4th, 1980, Jimmy Page, Robert Plant and John Paul Jones announced in a press release that they decided not to continue as Led Zeppelin in the wake of the death of drummer John Bonham just over two months earlier.

“We wish it to be known, that the loss of our dear friend and the deep respect we have for his family, together with the deep sense of undivided harmony felt by ourselves and our manager, have led us to decide that we could not continue as we were.”

While their fan base continually clamors for a reunion, Robert Plant continues to stand in the way of that happening. Their 2007 benefit show in London was the last time they played together as Plant refused to do more shows.

That 2007 show was only the fifth time that Plant, Page and Jones played together since Bonham’s death. The other four were at Live Aid in 1985; Atlantic Records’ 40th anniversary concert in 1988; Jason Bonham‘s wedding in 1990; and their induction into the Rock and Roll Hall of Fame in 1995.

At the time of Bonham’s death, Zeppelin were preparing for a U.S. tour in the fall of 1980.

Robert Plant on what people overlooked in Led Zeppelin’s music.