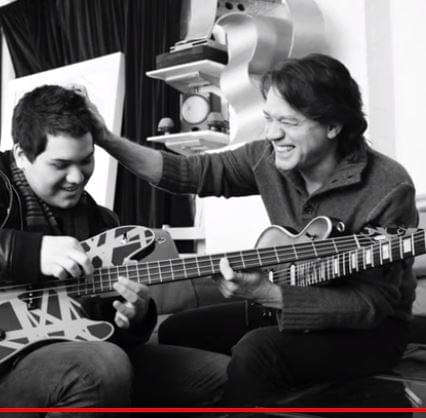 Proceeds from the song “Distance” will be donated to Eddie’s favorite charity, Mr. Holand’s Opus Foundation, which provides assistance to underfunded school music programs around the country.

Wolfgang wrote and performed all the music on the album.

Wolfgang Van Halen went back to the roots of Van Halen by releasing a solo project under the name Mammoth WVH.

Mammoth is the name that Eddie and Alex Van Halen used for their band when David Lee Roth first joined in 1974. “Distance” is the debut single, and its video shows a compilation of old home movies of Wolfgang, Eddie and Wolfgang’s mom, Valerie Bertinelli. Watch the clip on YouTube.

The album is due out next year, and Wolfgang says it could’ve come out in 2018, but he shelved it to spend time with his father.