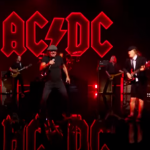 AC/DC return to the record bins this Friday with PWR/UP (Power Up) their first new studio album in six years.

Angus Young on how AC/DC came to record their new album, PWR/UP.

Some of the riffs and ideas that Angus and his late brother Malcolm had — for songs that ended up on PWR/UP — date back to the early 2000s.

Angus Young on the leftover material he had that helped make up the tracks on PWR/UP.

Malcolm died in 2017 from complications of dementia.

Produced by Brendan O’Brien, who oversaw their last two albums, PWR/UP is available in numerous configurations, including one that you can literally power up.

The limited-edition deluxe CD box set has a button on the side that powers up a flashing neon AC/DC logo light on the cover while the opening bars of the album’s first single, “Shot in the Dark,” can be heard on the box’s built-in speaker.

The box also contains a 20-page booklet and USB charging cable allowing the box to remain powered up and on display.

And of course it’s also available on vinyl as well as digitally.

Angus Young on the title of AC/DC’s new album, PWR/UP.