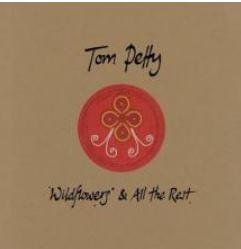 Tom Petty has sprouted up a number-one album from the grave as Wildflowers & All the Rest, a reissue of his 1994 album with loads of extras, sits atop Billboard‘s Top Rock Albums chart.

This latest success is based on the sale of 44,000 equivalent album units (38,000 downloads and physical sales, and 6.000 streams) and gives Petty his sixth number-one album and first since his An American Treasure box set in October 2018.

He is now tied for the second-most number-one albums in Billboard Rock Album chart history along with Bruce Springsteen and Dave Matthews. John Mayer leads with seven.

Wildflowers also re-enters the Billboard 200 at number-five, three better than it’s peak at number-eight 26 years ago. This makes it his eighth top five album and first since Hypnotic Eye hit the top spot in 2014.

While Wildflowers was credited as a Petty solo album, keyboardist Benmont Tench says it became a de facto Heartbreakers album.

In addition to Benmont and future Heartbreakers drummer Steve Ferrone, the other Heartbreakers on Wildflowers are guitarist Mike Campbell and the late Howie Epstein on bass and background vocals.