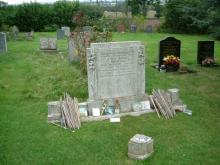 Led Zeppelin and the music world were dealt a devastating blow 40 years ago Friday — September 25th, 1980 — when drummer John Bonham died at the age of 32.

Bonham grave 0924 SC.JPG
After a day of rehearsals for Zeppelin’s upcoming fall tour, Bonham, who drank heavily all day, fell asleep at Jimmy Page’s house in Windsor, England. He was put in bed, and that’s where he was found later in the day, having choked on his own vomit — 10 years and seven days after Jimi Hendrix died the same way.

He left behind his wife Pat and their two children, Jason and Zoe. Jason went on to play in his dad’s place four times — Atlantic Records’ 40th anniversary concert in 1988; his wedding in 1990; Zeppelin’s induction into the Rock and Roll Hall of Fame in 1995; and the 2007 reunion concert in London.