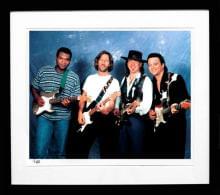 Stevie Ray Vaughan left us 30 years ago today (Thursday) — August 27th, 1990 — when the helicopter he was riding in went down during takeoff after a show at the Alpine Valley Music Theatre in East Troy, Wisconsin.

He’d opened for Eric Clapton that night, and three members of Clapton’s entourage were also killed in the crash when the chopper hit a ski mountain on its way to Chicago. Vaughan was just 35 years old. 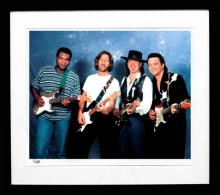 Also on the bill were his brother, Jimmie Vaughan, and Robert Cray. The four posed for photos before the show, one of which is on the Stevie Ray Vaughan website.

Vaughan had come through a lot and was probably in the best place he’d been in ages at the time of his passing. In an interview the year before, he addressed his recovery from drug and alcohol abuse.

Vaughan was laid to rest on August 31st, 1990, at Laurel Land Cemetery in Dallas, Texas. Among those who attended were ZZ Top, Stevie Wonder, Bonnie Raitt and Buddy Guy.

His tombstone reads: “Thank you… For all the love you passed our way.”