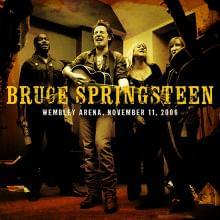 Wembley Arena November 11th, 2006 was captured at the London venue during his Seeger Sessions tour, making it the second show from that tour to be released as part of the Archive Series. The first was from the New Orleans Jazz & Heritage Festival and came out in 2018.

The Wembley album includes four songs that don’t appear on either the official Live Dublin album or New Orleans archival show: “Devils & Dust,” “Jesus Was an Only Son,” “Froggie Went a Courtin’,” and the debut of “Long Walk Home,” which would be released the following year on Magic.

This new release has a strong political message, as the 2006 U.S. midterm elections were held just four days before, with the Democrats winning control of both houses of Congress for the first time since 1994. This was a bitter defeat for President George W. Bush, casting light on country’s objection over the Iraq War.