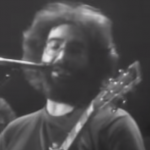 The music world was dealt a big blow 25 years ago today August 9th, 1995, when at 4:23am PT,Jerry Garcia was found dead in his room at the Serenity Knolls residential treatment facility in Forrest Knolls, California, eight days after his 53rd birthday.

Garcia, who had a long history with substance abuse, diabetes, smoking and a poor diet, had checked into the facility shortly after the Grateful Dead finished their summer tour on July 9th, 1995 at Soldier Field in Chicago on a bill with The Band.

Remembering that day in 1995, Bruce Hornsby, a part time member of The Dead, was in Houston when heard the news. Later in the day he flew to Boston for an in-store appearance at Borders Books. Plugging his Hot House album, Deadheads crowded into the store, turning it into what he says was a “de-facto wake.

“They were clearly looking for comfort wherever they could find it. I guess they figured I was a sympathetic kindred spirit and was there for them. And I was, and they were there for me. I played songs and talked to the audience. It was very collegial and very interactive. I might have played my favorite Grateful Dead song, ‘Wharf Rat.’ It seemed appropriate for that moment…

“I miss him so much. He was such a deep soul, but also a really funny guy. He ready to laugh and had the sharpest wit and just a great recall. Great memory, great knowledge of the world. He was a great hang.”

And Dead drummer Mickey Hart was home in Northern California when he found out.

“I always remember where I was when I heard. You never forget those kinds of things. Jerry wasn’t well to begin with, and he was winding down. He was living on borrowed time. Everybody was ready for it, but you can never really be ready for it.

“It was the morning, and I went to my yoga instructor, who lived in a little shack over the hill from my house [in Sonoma County]. I used to walk over there through a redwood grove. He never played music; we always tried to make it a bit more zen. But as I approached his place, he was playing music. And it was Jerry Garcia Band music. That put me off immediately. Right then, I knew something was in the air. I knew something was really wrong.

“I walked up to the front door and he was sweeping the floor, getting ready for a session. I said, ‘What’s with the music?’ He said, ‘Haven’t you heard?’ He didn’t have to say anything else. It was early and I don’t know how he found out about it. But I turned around and walked back through the woods. It could have been a rumor, but I knew it wasn’t. I just knew it. It felt like someone had hit me with a hammer…”

Hart adds that he recognizes the anniversary with a little get together.

“When he died, I planted three blue redwoods, one for each decade [I knew him], on my property. They’re pretty rare. They’ve really grown in the last 25 years. They’re about 40 feet high now. That’s Jerry’s place, and that’s where we go to celebrate him. We have a barbecue and have some of the old friends over and tell jokes.”

A private funeral was held on August 12th at St. Stephen’s Episcopal Church in Belvedere, California, followed by a public memorial the next day at the Polo Fields in San Francisco’s Golden Gate Park. His ashes were scattered by his widow, Deborah Koons, and Dead bandmate Bob Weir into the Ganges River at the holy city of Rishikesh, India, and into the San Francisco Bay.

In addition to Koons, Jerry was survived by four daughters, three ex-wives and his brother, Clifford.

Since his passing, the surviving members of the Dead have reunited on several occasions under an array of names including The Other Ones, The Dead, Furthur and their current incarnation, Dead and Company with John Mayer on guitar.

From his tour stop in New Hampshire on August 9th, 1995, Bob Weir talks about the death of Jerry Garcia.

Jerry Garcia, in a 1993 interview, talks about his poor health