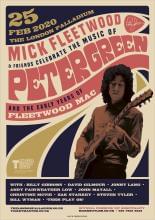 Peter Green, guitarist and founder of Fleetwood Mac, has passed away. He was 73.

His family issued a statement saying, “It is with great sadness that the family of Peter Green announce his death this weekend, peacefully in his sleep. A further statement will be provided in the coming days.”

Mick Fleetwood, who organized a tribute concert to him this past February in London, says, “For me, and every past and present member of Fleetwood Mac, losing Peter Green is monumental! Peter was the man who started the band Fleetwood Mac along with myself, John McVie, and Jeremy Spencer. No one has ever stepped into the ranks of Fleetwood Mac without a reverence for Peter Green and his talent, and to the fact that music should shine bright and always be delivered with uncompromising passion!!!

“Peter, I will miss you, but rest easy your music lives on. I thank you for asking me to be your drummer all those years ago. We did good, and trail blazed one hell of a musical road for so many to enjoy.

“God speed to you, my dearest friend……. Love, Mick Fleetwood.”

Green first made his mark in 1965 when John Mayall picked him to replace Eric Clapton in The Bluesbreakers. At the time, Mayall said, “He might not be better [than Clapton] now. But you wait… He’s going to be the best.”

Eventually changing the name to Fleetwood Mac, they had success thanks in part to such Green-written songs as the instrumental “Albatross,” which topped the British singles chart, “Oh Well,” “Man of the World,” “Stop Messin’ Round” (covered by Aerosmith), “The Green Manalishi (With the Two-Prong Crown)” (covered by Judas Priest), and “Black Magic Woman,” a hit for Santana in 1971.

Dealing with schizophrenia, reportedly due to taking bad LSD, Green left the band in 1970 after their third album, 1969’s Then Play On.

Rejecting material goods and living on a commune, Green said at the time, “I’ve got to do what God would have me do, start some kind of positive action, despite newspaper distortion or whatever. I’m not worried if it means I’ll fade from public view — it’s better to set a good example.”

Green briefly rejoined the Mac in 1971, but that was just to help them honor dates when Jeremy Spencer joined a religious cult.

He released seven albums, has been featured on numerous compilations, and even played guitar on “Brown Eyes” on the Mac’s 1979 album, Tusk.

Green was inducted into the Rock and Roll Hall of Fame with Fleeetwood Mac in 1998, and performed at the ceremony, not with the Mac, but with Santana on “Black Magic Woman.”

Green, born Peter Allen Greenbaum on October 29th, 1946 in London, leaves behind a daughter, Rosebud, and a son, Liam.

The concert Mick Fleetwood organized in tribute to Green this past February, will be released in the fall. The show featured performances by David Gilmour, Billy Gibbons, Pete Townshend, Steven Tyler, Christine McVie, Bill Wyman, Kirk Hammett and many others.

Green is the fifth member of Fleetwood Mac to die, following

Aerosmith‘s cover of “Stop Messin’ Round”:

Judas Priest‘s cover of “The Green Manalishi (With the Two-Prong Crown)”: