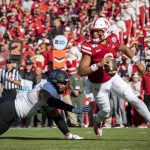 Martinez was named to the Maxwell Award watch list for the second time in his career Friday morning. The award is given annually to the College Player of the Year. It is named in honor of Robert “Tiny” Maxwell, a former standout at the Swarthmore College and a renowned sports writer and football official.

The two-year starter from Fresno, California, completed 60-percent of his passes for nearly 2,000 yards and 10 touchdowns in 2019. On the ground last season, Martinez added 626 yards and seven touchdowns. His total offense output of 258.2 yards per game ranked third in the Big Ten.

Martinez has tied or set 11 school records in his first two seasons under center, including the NU career mark for games with at least 400 yards of total offense at four. He is currently seventh in school history in passing yards and fifth in total offense.