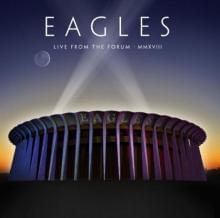 The Eagles have released a live version of “Hotel California” ahead of the October 16th release of Live From the Forum 2018.

The album was recorded over three nights at The Forum in Los Angeles — September 12th, 14th and 15th — during their first tour without Glenn Frey, who passed away in 2016. His spot has been filled by his son, Deacon Frey, and country great and longtime friend of the band Vince Gill.

The three-night stand was also captured on film and will be shown again on ESPN this Monday night at 9 ET.

The Eagles will resume their Hotel California tour on September 16th, 2021 in Denver.