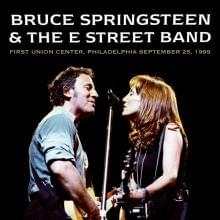 Bruce Springsteen‘s live archival release for July is from September 25th, 1999 at the First Union Center in Philadelphia during his reunion tour with The E Street Band.

It was one of the shorter set lists of the tour — 22 songs — but they were long ones, starting with the 11-minute show opener, “Incident on 57th Street.” Sixteen others are over six minutes, including five that clocked in over 10, with a 19-minute “Tenth Avenue Freeze-Out.”

While Bruce wrote out a set list for the show, he called out the following audibles: “Atlantic City” replaced “Trapped”/”Darlington County”; and “Sherry Darling” and “Streets of Philadelphia” replaced “Working on the Highway” and “Ghost of Tom Joad.”