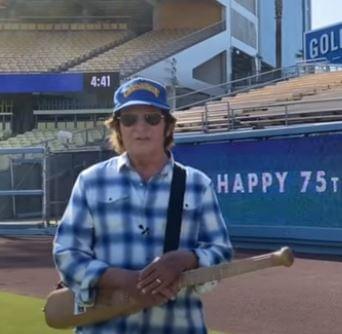 John Fogerty celebrates a milestone birthday as he turns 75.

Achieving success first as a member of Creedence Clearwater Revival and then on his own, he is an Army veteran and a member of both the Rock and Roll Hall and Songwriters Hall of Fame, and his “Centerfield” baseball bat guitar is in the National Baseball Hall of Fame.

He is married to his second wife, Julie, and has seven children — three with his first, and three with Julie, who has a daughter from a previous marriage. His two sons with Julie — Shane and Tyler — are in his band.

He recorded Fogerty’s Factory with his three children at home during the coronavirus lockdown.

John says, “Our family got together and decided we would spread some joy with music in these trying times. We recreated Cosmos Factory (the warehouse where CCR rehearsed was The Factory) and it became Fogerty’s Factory… My sons, Shane and Tyler, daughter Kelsy, [my wife] Julie and we even got [my brother] Bob Fogerty to shoot the cover photo, a total family affair!”

Behind the camera, Julie captured them doing “Centerfield,” “Have You Ever Seen the Rain?,” “Long as I Can See the Light,” “Down on the Corner,” “Bad Moon Rising,” “Fortunate Son” and “Proud Mary.”

The songs are available now on all digital platforms.