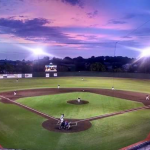 The Nebraska American Legion Executive Committee has approved plans to move forward with a legion baseball season. That according to a post on the Nebraska Legion baseball website. Chairman Jody Moeller says the group will be posting registration forms and updated rules at nelegionbaseball.net. Kearney Legion officials are meeting next Tuesday to decide how they will move forward.