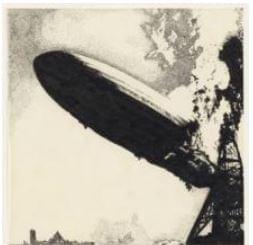 A very cool piece of rock memorabilia is on the auction block — the original artwork of the cover of Led Zeppelin’s 1969 self-titled debut album.

George Hardie‘s design, based on the historic 1937 photograph of the Hindenburg disaster taken by Sam Shere, is estimated to sell for between $20- and $30,000 when it goes up for bids from June 2nd through the 18th at Christie’s.

Jimmy Page rejected a few of Hardie’s early drafts before he suggested he do something with Shere’s Hindenburg picture. And what he did was to use tracing paper to recreate the image in stipple — a style of drawing using small dots — to give it the same feel as a low-resolution newspaper photo. 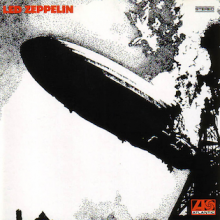 Peter Klarnet, Christie’s senior specialist of Books and Manuscripts, tells Rolling Stone, “The historical significance of this album cover cannot be understated. It marked a major turning point in the history of pop music, heralded by the debut of Led Zeppelin. It was louder, bolder than what had come before and would come to define the shape of hard rock for generations. This simple rendering of the Hindenburg exploding over Lakehurst, New Jersey stands as a monument to that important historical moment. And the image has endured in a way that most other album covers have not — it very much has taken on a life of its own.”