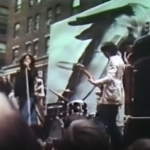 Ronnie Wood‘s first performance with The Rolling Stones was 45 years ago, on May 1st, 1975, when the band announced their Tour of the Americas from the back of a moving flatbed truck in New York City. (Ronnie’s first full concert with the Stones took place on June 1st, 1975 in Baton Rouge, Louisiana, which was also his 28th birthday.)

Ronnie Wood on The Rolling Stones performing on a flatbed truck on May 1st, 1975 in New York City.

It was Charlie Watts‘s idea to announce their tour in that way.

Charlie Watts on The Rolling Stones performing on a flatbed truck in New York City on May 1st, 1975.

Reporters were gathered in the Fifth Avenue Hotel in Greenwich Village expecting a press conference when the truck came around the corner.

The late Scott Muni of WNEW-FM in New York reports live on The Rolling Stones’ May 1st, 1975 New York truck ride down Fifth Avenue to announce the band’s U.S. tour. It was their first public performance with Ronnie Wood

Less than a year later, February 23rd, 1976, the relatively unknown AC/DC pulled a similar stunt, performing “It’s a Long Way to the Top (If You Wanna Rock ‘n’ Roll)” on the back of a flatbed truck for the Australian music television program Countdown as it made its way down Swanston Street in Melbourne, Australia.