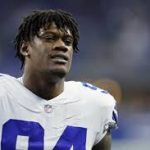 Dallas Cowboys defensive end Randy Gregory, suspended indefinitely in February 2019, has officially filed for reinstatement to the NFL. Under the league’s substance-abuse policy, the NFL has to make a decision on Gregory’s status in the next 60 days. The former Husker was suspended all of last season for recurring issues involving the substance-abuse policy that date to the 2015 scouting combine, before he was picked in the second round by the Cowboys. He has been suspended four different times for failed or missed tests. Under terms of the new collective bargaining agreement, players can no longer be suspended for a positive test for marijuana, but because he was penalized under the old system he would still need to be welcomed back by commissioner Roger Goodell. He has played in only 28 games in his career.

The Nebraska football team got a verbal commitmentent from Christopher Paul Jr., a three-star linebacker from Georgia. The 6-foot-1, 230-pound Paul announced his commitment on social media. He is the second linebacker in Nebraska’s 2021 class, joining South Dakota inside linebacker Randolph Kpai. His pledge gives Nebraska four commits in the 2021 class. He also had offers from West Virginia, Minnesota, Michigan State, Tennesee and Stanford.

In other requiting news;

Nebraska is in the top six of three star 2021 prospect Xavier Worthy. The 6-foot-1 160-pound wideout from California also has from Michigan, Oregon, Oregon State, Utah and Fresno State.

Nebraska guard Dachon Burke will not return to the Husker men’s basketball team. Burke entered the transfer portal Saturday. The move comes four days after teammate Jervay Green did the same. The 6-foot-4, 180-pound guard is a junior in eligibility after sitting out last season to satisfy NCAA transfer rules after coming to Nebraska from Robert Morris. He is on track to graduate this spring and would be immediately eligible should he indeed transfer to another program. Burke’s departure means Nebraska now has one open scholarship for the 2020-21 season.

In other Sports headlines;