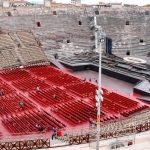 In a rare joint statement, concert promotion giants Live Nation and AEG say they’re halting all big-scale tours until the start of April and are asking all artists to safely make their way home. The statement, which also includes four major booking agencies, says, “At this time, we collectively recommend large scale events through the end of March be postponed. We continue to support that small-scale events follow guidance set by their local government officials. We feel fortunate to have the flexibility to reschedule concerts, festivals, and live events as needed, and look forward to connecting fans with all their favorite artists and live entertainment soon.”

A source close to the situation tells Rolling Stone that the hope is that tours resume in April, though many large-scale tours such as the Rolling Stones, Robert Plant, and Justin Bieber don’t start until May.

The announcement comes at a time when the live-music industry is bracing for impact. The spread ofCOVID-19, the coronavirus that the World Health Organization recently declared a pandemic, has prompted government officials to limit large public gatherings. The South by Southwest festival was canceled last week over worries about large crowds, Coachella was postponed, and New York Gov. Andrew Cuomo announced Thursday that gatherings of more than 500 people would be restricted in the state, just ahead of Billie Eilish’s concert at Madison Square Garden.