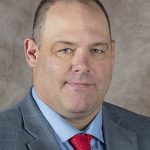 In the same week that Husker volleyball brought back a former coach to the staff, football does the same.

Mike Dawson returns to Nebraska after spending a year in the National Football League coaching outside linebackers for the New York Giants. Dawson coached Nebraska’s defensive line in 2018 and was in the same position at UCF under coach Scott Frost.

“I am thrilled to bring Mike Dawson back to Nebraska to re-join our coaching staff,” Frost said in a release. “Coach Dawson has a great history with our coaching staff and brings all of the attributes we look for in an assistant coach. He is a man of great character, has outstanding defensive acumen and knowledge of our defensive system, is a proven teacher and recruiter and relates well to his players.”

Dawson takes over the Outside Linebackers Coach position that was left vacant after Jovan Dewitt took a job with North Carolina. A 21 year coaching veteran, Dawson has coached at 11 FBS schools and spent four years coaching in the NFL.

“The opportunity to coach at a school with Nebraska’s football tradition and commitment is special,” Dawson said in a release. “I am fired up to represent the N, and sell Husker Football and the University of Nebraska to young men around the country. Our family fell in love with Nebraska during our one year here. The passion of the fans and the culture Coach Frost has brought is extraordinary.”