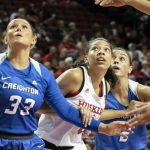 Two streaks were going toe-to-toe on Sunday. Nebraska had won their first five games of the season. Creighton had won the last three games against Big Red.

Creighton(4-1) was an analytics case study in the ball game. The Bluejays took more 3s than any other shot in the game. They also shot more free throws than they attempted shots inside the arc.

For those unfamiliar, the trend in basketball has pushed for shots from behind the arc or at the basket and neglecting mid-range shots that have the same point value as those closer to the basket. Creighton shot 14-of-32(44%) on 3s and 4-of-13(31%) on shots directly by the basket. The mid-range shots were 3-of-12(25%). The Bluejays also made 23-of-29 at the free throw line.

“We got outscored 42-9 from behind the arc,” said Nebraska coach Amy Williams. “That’s a really tough thing to overcome. We didn’t get out to their shooters with the sense of urgency that we needed to.”

Nebraska(5-1), meanwhile, made more shots in the game, going 30-of-68 from the field. The Huskers outscored the Bluejays 46-10 in the paint. The difference in the contest was the three point shooting, as Big Red shot just 3-of-16 from outside.

Junior Kate Cain had a team-high 18 points and seven rebounds to go with three blocked shots. She now has 199 blocks in her career.

“If we use this as a tool to bring us closer together and really find a way to correct some things then I think it could be a valuable game and turning points for us,” said Williams.

Nebraska is next in action at the South Point Shootout in Las Vegas. The Huskers will play Southern California on Friday and Sacred Heart on Saturday.