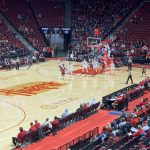 Nebraska got up early and never looked back.

Utilizing 57-percent shooting in the first quarter, the Huskers raced out to a 20-9 lead after one and 35-14 at the half. The shooting cooled off in the third quarter where the Bulldogs actually outscored the Huskers 17-14, but the deficit and a strong fourth quarter earned Nebraska the win 68-46.

“I feel like we played 25 minutes of pretty good defense,” said coach Amy Williams. “We played against a team that was relentless on the boards and really wanted to try to get out and go in transition. If you would have told me before the game we were gonna give up 25 offensive rebounds and still even be in the ball game I would have probably not believed you.”

There were plenty of Husker connections in this one. Alabama A&M coach Margaret Richards is a Nebraska alum, playing for both Paul Sanderford and Connie Yori.

“It’s unbelievable,” said Richards. “We flew into Omaha, coming up and I’m seeing all the signs and all the wonderful memories. This place helped shape me into the woman I am today.”

“It was a really good feeling,” said Jones. “When I was walking in, it was like deja vu, because I played state basketball here. I played my last high school game here. It just brought back a lot of memories. I’m just happy my family got to see me play.”

Junior Center Kate Cain moved closer to the career shot blocking record at Nebraska. She added eight today to get to 187. Janet Smith set the record at 238 from 1979-82. Cain has already set the freshman, sophomore, and season blocked shot records. She is also one of 20 on the 2020 Lisa Leslie Award Watch List, which goes to the top center in women’s college basketball.

10 of the 12 players that got in the game for Nebraska scored, with four of them getting in double figures. Senior Hannah Whitish led the way with 12 while Cain and sophomores Ashtyn Veerbeek and Leigha Brown each poured in 10.

“Our whole starting lineup today did a great job of jumping out,” said Williams. “Then I thought when we went to the bench we were able to extend the lead even further. We saw some good things. We’re still working some rotations right now.”

Nebraska is next in action Sunday at Missouri with a scheduled 2 p.m. tip.