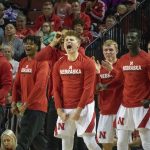 It may have been an exhibition, but the Fred Hoiberg era at Nebraska started big with a 91-63 win over Doane.

The game did not start big for the Huskers though, as Doane raced out to a 10-2 advantage, scoring on the first five possessions. That would be all the momentum the Tigers could muster until the end of the half.

Nebraska then went on a 37-7 run to take control of the game.

What was very un-Hoiberg-esque was the 3-point shooting. While at Iowa State, Hoiberg’s teams led the Big 12 in 3-pointers four out his five years. Nebraska started the game 0-for-8 from deep while Doane was 0-for-10 at the time. Dachon Burke Jr. would get the first long ball to go with just over 6 minutes remaining in the first half.

Burke said the team came out a little slow, and for him personally there were nerves in the first few minutes.

“It was like wow; I haven’t played basketball in a year and a half,” said Burke. “You can’t compare it to PBA, so it felt good to get out there and play.”

The second half started with a much cleaner shooting performance where Burke scored 8 points in the first three possessions as Nebraska raced out to an 11-4 run. That momentum would carry the Huskers through a second half of 55-percent shooting and a lot of minutes being spread around.

Cam Mack looked every bit the part of a big time distributor in his Pinnacle Bank Arena debut. Mack had 8 assists to go with 5 points and 7 rebounds in just 23 minutes of work. Burke led the Huskers in scoring with 15 points on 6 of 9 shooting. 11 players scored with 5 reaching double figures.

Hoiberg was happy overall with how the first game in front of a crowd went for his squad.

“For the first time out in front of the fans, I was pleased for the most part with our approach to this game,” said Hoiberg after the game. “I thought early on we had some jitters. We dug ourselves into an 8-0 hole, then 10-2. Then we calmed down. We got our hands on balls, we rebounded it and that got our transition game going. If we can build off that defensively, to see what we can do and create opportunities on the offensive end is very important for this team.”

Nebraska begins the regular season Tuesday, November 5 at home against UC-Riverside at 8 pm.