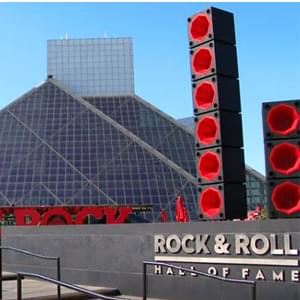 The Rock and Roll Hall of Fame has announced the nominees for next year’s class.
In alphabetical order, they are:
• Pat Benatar
• Dave Matthews Band
• Depeche Mode
• Doobie Brothers
• Whitney Houston
• Judas Priest
• Kraftwerk
• MC5
• Motörhead
• Nine Inch Nails
• The Notorious B.I.G.
• Rufus featuring Chaka Khan
• Todd Rundgren
• Soundgarden
• T.Rex
• Thin Lizzy
To be eligible for nomination, the artist must have released a commercial recording at least 25 years prior to the year of nomination.
Nine of the 16 nominees are on the ballot for the first time — Benatar, Dave Matthews Band, Doobie Brothers, Motörhead, The Notorious B.I.G., Soundgarden, T.Rex, Thin Lizzy and Houston.
The seven other acts have now been nominated
• Kraftwerk – 6 times
• MC5 – 5 times
• Rufus featuring Chaka Khan – 4 times
• Nine Inch Nails – 3 times
• Depeche Mode – 3 times
• Judas Priest – twice
• Todd Rundgren – twice
Ballots are sent to an international voting body of more than a thousand artists, journalists and music industry figures.
Fan voting will be open through January 10th at RockHall.com. The top five artists selected by the public will count as one vote, tallied along with all the other ballots.
The inductees will be announced in January with the induction ceremony set for May 2nd in Cleveland.
We heard from some of this year’s nominees:
Doobie Brothers: “We are honored to be nominated for the Rock and Roll Hall of Fame and are thrilled that members of the band, past and present, have been included. We would like to congratulate the other incredible artists nominated this year.”

Patrick Simmons on The Doobie Brothers being nominated for induction into the Rock and Roll Hall of Fame.

The other nominated Doobies are Tom Johnston, John McFee, Michael McDonald, John Hartman, Michael Hossack, Tiran Porter, Keith Knudsen and Jeff “Skunk” Baxter. Hossack and Knudsen are both deceased.
Thin Lizzy guitarist Scott Gorham: “Back in 1974, I walked into a pub in London to audition for a (then) little-known band that was looking for two new guitar players. From the moment I met Phil [Lynott] I knew there was something special about him. We went on many highs and incredible experiences on a roller coaster of rock and roll. But always the music was at the forefront. Now it is 45 years later and there have been a lot of shows and a lot of experiences. I am deeply honored that Thin Lizzy are nominated for the Hall of Fame… thank you to all the fans everywhere.”
The nominated members of Thin Lizzy are Gorham, the late Phil Lynott, Brian Downey, Eric Bell and Brian Robertson.
Judas Priest: “We are in the screaming metal thrill zone again with our second Rock and Roll Hall of Fame nomination, especially as we approach our 50 heavy metal years anniversary in 2020.”
The nominated members of Priest are: Les Binks, K. K. Downing, Rob Halford, Ian Hill, Dave Holland, Glenn Tipton and Scott Travis.
Benatar and Rundgren were unavailable for comment, but Todd made it clear when he was nominated last year that he wants nothing to do with the Rock Hall, especially after coming in third in the Fan Vote.

Todd Rundgren shares his feelings on the Rock and Roll Hall of Fame.

If elected, Motörhead would not have any surviving members to accept the honor. Ian “Lemmy” Kilmister, “Fast” Eddie Clarke and Phil “Philthy Animal” Taylor are all dead.
Soundgarden: Matt Cameron, the late Chris Cornell, Ben Shepherd, Kim Thayil and Hiro Yamamoto.
Soundgarden guitarist Kim Thayil had just returned home from Britain, performing with MC50 — the current version of another Rock Hall nominee, the MC5. He said he was jet-lagged when he heard the news and hasn’t even spoken to his Soundgarden bandmates about it yet.

Soundgarden guitarist Kim Thayil was jet-lagged when he first heard about the band’s Rock Hall nomination.

As usual after the announcement of the Rock and Roll Hall of Fame nominations, the decision about who should represent each band has its detractors.
Motorhead drummer Mikkey Dee, now a member of the Scorpions, was not named as a member of the band. He tells Billboard, “That is pure wrong, I would say, and I know [guitarist] Phil [Campbell] will be very disappointed, too. We’ve been carrying the flag for 25 years together, and actually brought Motorhead to what it was. We did 25 years out of the 40. The original band lasted just a few years. They started it off, but as Lemmy said himself they wouldn’t have lasted another six months doing that lineup. I don’t think we would’ve been where we are today without the 25 years we spent touring.”
Campbell joined the band in 1984 and played on 16 albums. Dee came on board in 1992, and both played with Lemmy until his death in 2015.
And then there are the non-reactions from some of those who are named.
Todd Rundgren, who was nominated for the second straight year and expressed no interest in the Hall, offered up a “no comment.”
Pat Benatar has also not commented on her nomination.