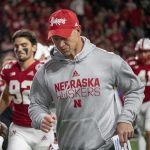 Sometimes there are setbacks on the road to success. For Nebraska football fans, desperate for a winner, success may seem light years away after falling behind 38-0 in the first half. When the dust settled, the Huskers succumbed 48-7 to fifth-ranked Ohio State on Saturday night in Memorial Stadium.

Adrian Martinez threw three first half interceptions and only 10 yards, while his counterpart, Justin Fields, accounted for 236 yards and three touchdowns before halftime. The Buckeyes dominated every statistical category over the first two quarters, from total yards (378-76) to 3rd down conversions (7-8, 1-6).

J.K. Dobbins rushed for 177 yards on 24 carries, dragging would-be tacklers for additional yardage throughout the night. Master Teague scored twice in the second quarter on the ground.

The Husker offense got the crowd going on their third possession by going back in time. Dedrick Mills transformed from running back to fullback and ran a trap out of the I-formation for 2 yards. Then, after catching a 10-yard pass, Mills again ran a fullback trap, this time for 12 yards. Then a pitch out of the ‘I’ for 5. An option keeper for Martinez for 8 yards and another first down. And a third Mills trap play for 12 more. “We kind of went back to some old school Nebraska stuff and it worked and we drove it down the field,” Frost recalled. Alas, after an OSU timeout, Martinez fluttered a high pass, NU receiver Wan’Dale Robinson tipped it, and Buckeye cornerback Jeff Okudah picked it off as he was laying on his back. “If we’d given the quarterback a little more time it probably would’ve been a completion and a touchdown. He was hurried a little and had to float it and we got a bad break,” Frost lamented.

Ohio State stuffed the Husker offense in the first half, allowing only two drives of more than 10 yards. In the second quarter, NU netted just nine total yards as the Buckeyes accumulated 224 yards and 24 points in building their 38-0 halftime advantage.

“We’re all disappointed,” head coach Scott Frost said. “I thought we had a puncher’s chance if we came out and played a really good game, and we didn’t, so that’s the result.”

The Huskers finally put together a scoring drive in the third quarter, going 75 yards in five plays. Martinez sparked it with a 56-yard sprint, setting up Mills in the red zone. Mills hit paydirt from nine yards out, and the patient fans who held out hope were at last able to release their red balloons with 1:44 remaining in the 3rd.

“This game is not going to define this team,” Martinez said after the game. “What’s going to define our team is how we finish. We have a whole season ahead of us. A lot of Big Ten West opponents coming up, so what’s not to look forward to?”

The Huskers are back in action next Saturday at home against Northwestern. “I want the guys to go to bed tonight and put this behind them and be looking forward to a week from today,” explained Frost. “We have another chance to come out and play in front of these great fans.” Martinez added, “We’re going to get back to work on Monday and handle business.”