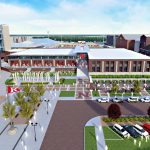 The University of Nebraska Athletic Department announced their intention to construct a brand new, 350,000 square foot, $155 million athletic facility to the northeast of Memorial Stadium on Friday afternoon.

Slated for the space currently occupied by the Ed Weir Track, the North Stadium Expansion Project is tentatively scheduled to break ground next spring and open in June 2022. “This will not only serve as the home for Nebraska Football, but also house the training table and an academic services area for our over 650 student-athletes,” according to Nebraska Athletic Director Bill Moos.

“We’ve fallen a little behind,” head coach Scott Frost said. “Since we built North Stadium, I think all but two other Power Five schools have either built new facilities or upgraded.” The Osborne Complex at North Stadium was completed in 2006.

While many details are still to be worked out, here are a few: the new locker room will be able to accommodate the larger roster Scott Frost wants; strength & conditioning coach Zach Duval will provide input on the new, larger, football-specific weight room; director of nutrition Dave Ellis is going to help oversee the new training table.

Other elements of the new facility include a new medical treatment area, equipment room, meeting rooms, coaches’ offices, and one additional outdoor practice field. Academic support for each of Nebraska’s 24 sports will also be a part of the project.

“This is going to help all sports starting today,” said Matt Davison, Associate Athletic Director for football. “Everybody every sport is recruiting today – those kids are going to have a chance to enjoy this wonderful facility.”

“Now is the time while the football program is building,” Frost said. He is excited about the impact he thinks the project will have, too. “It’s going make us feel more like a family.”