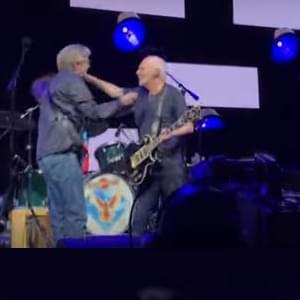 Friday’s bill also included Bonnie Raitt and Billy Gibbons, both of whom sat in with Jimmie Vaughan and his band. Bonnie did “Baby Please Come Home” and “I Ain’t Never,” and Billy did “Sharp Dressed Man” and “La Grange.” Bonnie joined Sheryl Crow for three songs, including Bob Dylan’s “Everything Is Broken.”

Clapton and his band did a five-song set, and while Jeff Beck, with Johnny Depp on vocals, closed out the night.

On Saturday, Clapton sat in with the Tedeschi Trucks Band on Derek and the Dominos’ “Keep on Growing.” Clapton and Susan Tedeschi joined Los Lobos for “Made to Break Your Heart,” and John Mayer joined Clapton on “Layla” and “Crossroads.” Clapton’s set on Saturday also included a rendition of Prince’s “Purple Rain.”

Joe Walsh was also on the bill Saturday, joining his Eagles bandmate Vince Gill on “Rocky Mountain Way” and “Life in the Fast Lane.”