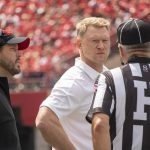 Nebraska stumbled slightly in their season opener, but were still able to secure a 35-21 win against South Alabama at Memorial Stadium last Saturday. This week however, the Huskers have a tougher test to face – taking on Colorado in a hostile environment.

NU head coach Scott Frost told reporters Thursday that the Husker’s have made the most out of their week in practice in preparation for the Buffaloes.

“We tell the guys all the time that they don’t all of a sudden show up on Saturday and play well,” Frost said. “They gotta earn that. How you practice is how you’re gonna play. I’d feel a lot better about things if we play the way we practiced this week.”

While Frost and company are trying to build off the foundation they laid last year, CU is still building their identity under first year head coach Mel Tucker. The Buffaloes are already off to a hot start though, having beat Colorado State 52 to 31 in week one.

“I was impressed with how well coordinated and organized they were for their first game being under a new coach,” Frost said. “… You can tell they’ve done a good job. All their track records as coaches would suggest that they’re going to get the guys up and going quick.”

In other notes from Thursday’s practice: