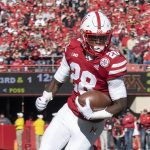 Speaking to reporters from the Hawks Championship Center, NU head coach Scott Frost said that a decision on whether sophomore running back Maurice Washington will play on Saturday won’t come until right before kickoff.

“Maurice has been doing a good job of practicing with the intention that he’s going to play,” Frost said. “The ball’s not in his court. It’s in our court as the University and for the football program to decide but he’s been doing a great job doing everything we asked him through fall camp, so he’ll be ready if that’s the decision that’s made.”

Washington is facing two charges, including a felony, back in his home state of California. He has a hearing set in a Santa Clara County Court on September third, three days following Nebraska’s season opener against South Alabama.

Frost also declined to make any further comment on redshirt freshmen Andre Hunt and Katerion Legrone, who were suspended indefinitely yesterday. Hunt is a wide receiver while Legrone is a tight end.

In other news and notes: