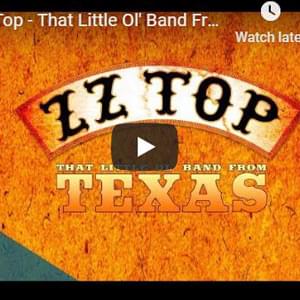 Billy Gibbons, Dusty Hill and Frank Beard will attend the Hollywood premiere and take part in a Q&A.
Commenting on the film, Gibbons says, “I think even our most steadfast fans will find themselves surprised by what they learn about those men behind the beards and cheap sunglasses. There we are, up there on the silver screen, and it’s something we’re delighted to share with fans of all stripes.”

On August 16th, ZZ will start the North American leg of a tour in Ridgefield, Washington.

ZZ TOP Is Goin’ 50! A New Album and Tour on the Way
ZZ Top is one of the best 3 piece bands in Rock as far as I’m concerned. Turning 50 hasn’t changed a thing. Check out this interview with ZZ TOP!