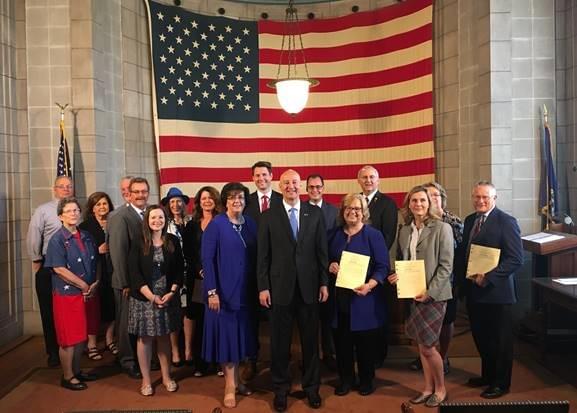 LINCOLN, Neb. – The following is from the office of Governor Pete Ricketts:

“At a ceremonial bill signing event in the Governor’s Hearing Room, Governor Pete Ricketts highlighted LB209, a bill that updates Nebraska’s informed consent law. LB209 requires physicians who prescribe the abortion pill to inform the mother that if she changes her mind after taking the pill (mifepristone), it may be possible to continue her pregnancy.

“Nebraska is a pro-life state,” said Governor Ricketts. “Senator Albrecht’s bill strengthens our informed consent law to give women full access to their medical options for preserving the life of a preborn baby. During my time in office, I have worked with the legislature to promote pro-life legislation such as the Choose Life license plate and Senator Albrecht’s Compassion and Care for Medically Challenging Pregnancies Act. As we move forward, we will continue to look for new pro-life legislation for Nebraska.”

In addition to strengthening the state’s informed consent laws, the bill also directs the Nebraska Department of Health and Human Services to publish information so that women can find a qualified health care professional to administer the reversal process.

“My goal in introducing and prioritizing LB 209 was to ensure that every woman seeking an abortion receives the information she needs and deserves to make a truly informed and voluntary decision,” said Senator Albrecht. “This is a pro-life, pro-woman bill.  I want to thank Governor Ricketts, Lt. Governor Mike Foley, my fellow Senators, and all the pro-life advocates who worked so hard to make this bill happen.”

LB 209 was introduced by Senator Joni Albrecht of Thurston and was approved by the Legislature by a vote of 36-12. At the ceremonial bill signing, the Governor was joined by Senator Albrecht and Nebraska pro-life advocates.”