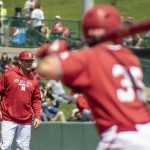 Michigan (37-15, 15-6 Big Ten) retains its lead in the conference standings, but things have tightened up. Nebraska is in a three-way tie for third with Illinois and Minnesota at 14-8, while Indiana is in second place at 15-7.

Luke Roskam hit a leadoff single in the second before Joe Acker’s single advanced him to third. Roskam scored when Angelo Altavilla reached on a fielder’s choice. Altavilla stole second on a strikeout and advanced to third on a wild pitch. Alex Henwood drove him in with an RBI single to center field.

Both teams were held scoreless for the next four innings before NU broke the game open in the bottom of the seventh. Altavilla drew a leadoff walk before Spencer Schwellenbach was hit-by-pitch to put two runners on. Henwood bunted and the Michigan pitcher committed a throwing error on his attempt to put out Altavilla at third. As the ball rolled into the outfield, Altavilla and Schwellenbach each scored, while Henwood advanced to second.

Henwood made it to third on a sacrifice bunt by Colby Gomes before a strikeout. Cam Chick singled through the right side to drive in Henwood and give the Huskers a three-run lead.

Senior right-hander Matt Waldron, making his 11th start of the season, went 6.2 innings and allowed two runs. Robbie Palkert threw 1.1 innings of relief before Gomes pitched the final 1.0 inning to earn his team-high 11th save of the season.

The Huskers and Wolverines meet for a doubleheader on Friday, starting at 3 p.m. The second game will begin at 8:02 p.m. and be televised on the Big Ten Network. Fans should use Friday’s game ticket to get into both games. Fans with a Saturday ticket can use it for general admission entry on Friday.