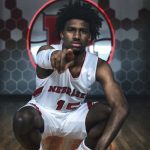 Samari Curtis, a 6-foot-4, 180 pound guard from Xenia, Ohio, has committed to Nebraska. He’s the second player to commit to NU on Wednesday and the fourth commitment of the week for Fred Hoiberg and his staff.

Curtis was originally committed to Cincinnati, but asked out of his National Letter of Intent once their head coach, Mick Cronin, left for UCLA. Curtis is rated four stars by 247Sports. He also won the state of Ohio’s Mr. Basketball award this past season.

“Samari is an elite guard,” Nebraska Coach Fred Hoiberg said in a press release. “He gives us size and length at the guard position and his skillset blends well with the other guards currently on our roster.”

Curtis would be the 14th scholarship player on the roster, depending on if Isaiah Roby returns for his senior season. The 6-foot-8 forward is currently at the NBA Combine in Chicago. Also, it should be noted that Curtis is wearing Roby’s No. 15 in his announcement photos.