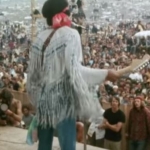 The wait is over as Woodstock producer and co-founder Michael Lang says there will be an official 50th celebration of the music’s most iconic festival.

The Watkins Glen International Speedway was the site for Summer Jam, which once received the Guinness Book of World Records entry for the “largest audience at a pop festival” when an estimated 600,000 showed up to see The Allman Brothers Band, The Band and The Grateful Deadperform on July 28th, 1973.

Ticket information and the initial line-up of more than 60 acts for Woodstock 50 will be announced next month, but Lang says it will be worth the wait.

In other words, as the festival’s tagline says, “Bringing Peace, Love & Music Back to the Planet.”

While there will be a celebration on the same weekend of the 1969 festival at The Bethel Woods Center for the Arts, which sits on the original site — the former Max Yasgur‘s farm in Bethel, New York — Lang’s event is official 50th anniversary celebration.

Like the three previous Woodstock festivals, the grounds of Watkins Glen will be available for camping, RVs, vans and more premium camping options.

For more details, go to Woodstock.com.