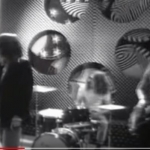 The group will receive the award during a ceremony and concert on May 11th in Los Angeles. Sabbath have won two Grammys in their career —Best Metal Performance in 1999 and 2013.

Whether all four original members — Ozzy Osbourne, Tony Iommi, Geezer Butler and Bill Ward — show up for the ceremony is another question. Osbourne has a break in his tour that night, but he did slag Iommi about Sabbath’s last tour. Ward has been estranged from the band for many years, and Butler’s new band, Deadland Ritual, will be on the road in the spring.