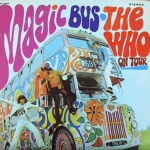 The Who: “Magic Bus”

The Hook: Pete Townshend wrote the song because he had nothing better to do.

Album: The studio version was included on The Who’s fourth American album, a studio record oddly titled Magic Bus: The Who on Tour. Ironically, the version most people know is the concert version from Live at Leeds.

Stats: The studio version peaked at number-25 on the Billboard Hot 100.

Background: “Magic Bus” was written around the time of The Who’s 1965 debut album in Pete Townshend’s London apartment, where he’d set up his own demo studio. He explains how he came to write the song, which the band recorded three years later.