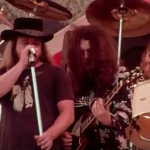 The Hook: Easier to learn than you’d think.

Background: Lynyrd Skynyrd guitarist Ricky Medlocke was the group’s drummer in 1970 and ’71, before they had a recording contract. After he left, he fronted the group Blackfoot, singing and playing guitar. He rejoined Skynyrd in 1996, after both the song’s writers, Allen Collins and Ronnie Van Zant, had passed. Medlocke says his job included learning Collins’ classic solos on “Free Bird.”

Lynyrd Skynyrd’s Rickey Medlocke, the band’s drummer in their very early days, on returning as a guitarist and having to learn the late Allen Collins’ part on “Free Bird.” OC:…pretty natural.