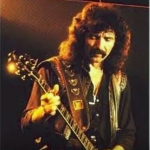 Born in Birmingham, England, where he still lives, he started playing guitar as a teenager after being inspired by Hank Marvin of The Shadows.

He sliced off the tips of fingers on his right hand while working in a metal factory but didn’t give up the guitar. He compensated by attaching soft plastic tips to the ends of his fingers.

Briefly a member of Jethro Tull, Iommi formed the band Earth, eventually changing the name to Black Sabbath, after the English title of an Italian horror movie.

Sabbath has gone through numerous line-up changes, but Iommi has been in every line-up. It doesn’t hurt that he owns the rights to the name.

The original line-up — of Iommi, Ozzy Osbourne, Geezer Butler and Bill Ward — was inducted into the UK Music Hall of Fame in November 2005 and the Rock and Roll Hall of Fame in 2006.

While battling cancer since 2011, Iommi has devoted time since Sabbath hung it up last year to working with various charitable organizations.